I am so hungry I could eat a horse! Oh wait, I did! 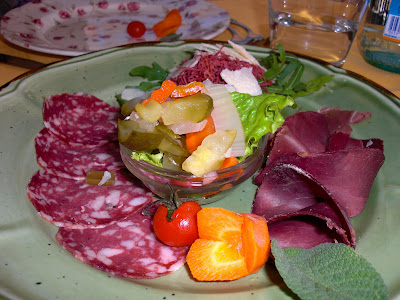 On a sunny afternoon HD and I arrived to El Pendola, a charming agriturismo located in the heart of Valpolicella. We had just arrived from visiting Lake Garda and we were eager to fill our bellies with delicious food from this family-run restaurant. Grandma (Nonna) cooks in the kitchen while her daughter, Anna Maria runs the restaurant and the quaint gift shop that sells local wine, salumi, and cheese. The shop also features products that were made on the farm such as honey, soaps, and candles. They also have ten rooms available for rent if you choose to visit Valpoicella. http://www.elpendola.it

On the menu was a reoccurring theme of horse. Horse meat, salami, smoked, shredded, tossed in pasta, made into a sauce, and even on a green salad. Consuming horse meat is considered normal in Northern Italy. It is leaner and more flavorful than beef and has seen a rise in popularity especially since the European scare of mad cow’s disease.

I did have some hesitation before I ordered it. I have always had an adventurous spirit about trying new foods, yet I was nervous. I have a fondness for the majestic animal.I grew up with friends who had them as pets. I wouldn’t eat Fido or Fuffy. Or would I? 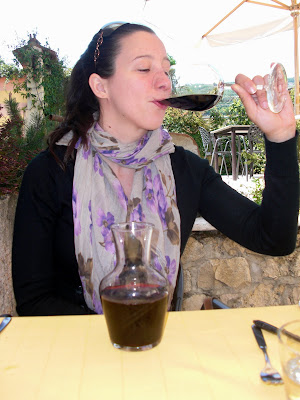 Yep, I was having me some horse for lunch.

We enjoyed a plate of shredded horse meat and two types of salumi. The shredded meat was smoked and served with slivers of parmigano reggiano cheese and drizzled with a local olive oil. On the plate were slices of bresaola, which is an air-dried and salted and aged for two to three months. It was sliced paper-thin and had a rich purple color and was intensely flavored, not gamey but rich in flavor and heavily scented. The other salumi had a distinct salty sweet flavor that melted in my mouth. I have never tasted salami quite like it before. It by far was my favorite part of the dish.

We washed it down with the vino delle casa (house wine), which is served by the carafe. With our stomachs full and with the high from the wine left to take our new tradition of napping just like the Italians do. Bella vita, no?

Email ThisBlogThis!Share to TwitterShare to FacebookShare to Pinterest
Labels: Valpolicella